During the ‘Women in Japan: Current Roles and Expectations’ webinar organized by KAS Japan on 3 December 2021, the speakers discussed the current situation of women in Japan, including their ‘double burden’ of having to work both outside and inside the home, as well as the fact that the support measures for women to balance work and housework/childcare had driven them to the ‘Mommy Track’ as a result, and experts shared a voice from working mothers saying that they want "satisfaction (fair evaluation)“ rather than "kindness (support for balancing work and childcare)".

Twenty-three years have passed since the word "Womenomics", a term that combined the word 'women' and 'economics ', meaning not only the organization but also Japan can boost its economy by getting more women into the workforce, was proposed in 1999. And ten years have passed since “Womenomics” was advocated as one of the policies of "Abenomics" during the second Abe- Administration in December 2012. However, the percentage of female managers is in the 10%-range which is a significantly low value in the world. This symbolizes the problems facing Japanese women in the economics field.

At the last webinar, positive changes as the impact of COVID-19 were pointed out, such as men realizing the amount of housework and women returning to full-time work through working from home. But where is the Japanese women's labor policy heading?

The purpose of this webinar is to understand how other countries elevate women into leadership positions in business fields. We will focus on Germany, a country which has historically similar views on gender roles with Japan, and it is a more gender-advanced country than Japan. However, it is in EU comparison lags behind in terms of women's advancement but tries hard to improve the situation. Through Germany’s evolving policies, we can learn pragmatic and realistic next steps for Japan. During the webinar, we intend to discuss possible policy recommendations, which – once formulated – help to foster change in the gender situation in Japanese society.

Japanese and German with interpretations in English

Please find more details including the link for registration on https://event-info.jp/womeninjapan/business/. 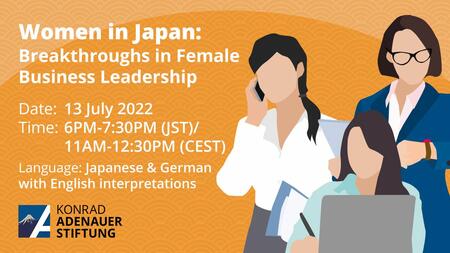