Mönchengladbach (Germany) – The city of Düsseldorf is the main location for Japanese companies and the main food centre for Japanese living in Germany. But the availability of modern production facilities and office units as well as attractive and affordable living space is becoming increasingly scarce – and thus more expensive. Alternatives are available on the left bank of the Rhine and are already in demand.

The Free Trade Agreement (EPA) between Japan and the European Union – the EU’s most comprehensive bilateral trade agreement – which came into force on 1 February 2019, will help to ensure that more Japanese companies are added to the 70 already established in the district of the Chamber of Commerce and Industry middle lower Rhine. Düsseldorf is likely to remain the main attraction. However, cities such as Mönchengladbach and Krefeld are also suitable as alternative locations for working and living due to their optimal infrastructural connections. Both cities are currently experiencing an upswing and in recent years have developed or expanded new construction areas and acquired investors who are realising modern production and office properties as well as residential projects.

At the network evening “Krefeld meets” Japan in July 2019, it already became clear that Krefeld has established itself as a strong location for Japanese companies alongside Düsseldorf. In 1988, the European branch of the globally operating Okuma Group, which employs a total of approx. 3,400 people, was the first company to settle in Krefeld. The number of Asian branches in the “City like Silk and Velvet” has now grown to 14 companies with approx. 1,500 to 2,000 employees. Eckart Preen, Managing Director of Wirtschaftsförderung Krefeld (Business promotion Krefeld), speaks in this context of a “traditional location”.

Modern and affordable commercial and office space is located, for example, in the south of Krefeld in the Businesspark Fichtenhainer Allee and Europark Fichtenhain. MeinWerk Gewerbepark GmbH has, for example, realised two industrial parks on Medienstrasse, which are suitable for almost all sectors due to their flexibility and third-party usability. Meanwhile, a variety of different companies have settled in the business park, for example, MK Steuerungstechnik as an industrial supplier, Schilder Lafrenz as a company for advertising technology, front panels and industrial signs, Korngiebel GmbH as wholesaler for hotel and restaurant laundry and the video production company Xamaram. The range of versatile commercial units with halls from approx. 380 m² to 680 m² and associated office units is ideal for branch offices and corporate groups. In addition to the possibility of renting, there is also a purchase alternative.

The settlement of Japanese companies has a long tradition also in Mönchengladbach. The logistics company Nippon Express, for example, has been based in Mönchengladbach-Güdderath since 1993 and now has 200 employees. More than 25 years ago, the main location criterion for the settlement was the very good transport connection. This has been further improved by the adjacent Regiopark industrial park, which is known as a logistics location.

With the “Nordpark” in Mönchengladbach, the city has also developed a top office location under the guiding principles of sport, business and leisure, which already offers jobs to over 2,000 people. Since the opening of the “Borussia-Park” football stadium in 2004, a large number of modern office buildings with equipment of the highest technical standard have been built. The Nordpark location offers a major advantage over the Düsseldorf office location: the rents in this area are up to 30% lower than in Düsseldorf, with comparable equipment. Expansion opportunities in the modern office buildings of the Nordpark are also guaranteed due to the flexible design – unlike in the state capital, where a company usually has to look for a new location when expanding its business activities.

In addition, depending on the location of the Krefeld and Mönchengladbach locations, there may be shorter travel times to Düsseldorf Airport than if you were driving through the city centre of Düsseldorf to the airport. The advantages for companies from Japan, who are looking for alternative locations in the extended surroundings of Düsseldorf, are thus obvious: modern buildings, low rents, the possibility of expansion, exemplary supply infrastructure and short distances without traffic jams – also for the employees of the companies.

With EIZO, the world’s leading manufacturer of high-end monitor solutions, a Japanese company has already recognised the advantages of the location. The real estate consultant bienen+partner has brokered an office space of approx. 3,500 m² for the group in a new building project on Liverpooler Allee in the Nordpark. The building will be completed in autumn 2020.

The fact that alternative locations for modern commercial and office space outside Düsseldorf are being sought is demonstrated by the inquiries we received from the real estate service provider bienen+partner in Mönchengladbach: “In 2019, we have already received several inquiries from Japanese companies looking for a suitable location in the Düsseldorf area,” confirms real estate consultant Rolf Zimmermann. “In the preceding years we had hardly any inquiries from the Asian region”, supplements real estate advisor Sebastian Achten, also working for bienen+partner.

bienen + partner advises customers holistically in all service areas around real estate. Since 1987, the region’s leading real estate consultant for commercial and sophisticated residential properties and real estate investments has deliberately concentrated on the Mönchengladbach, Düsseldorf, Neuss, Krefeld and Viersen areas. Due to the regional orientation and the very good contacts in the region, bienen + partner is able to offer customers optimal services. 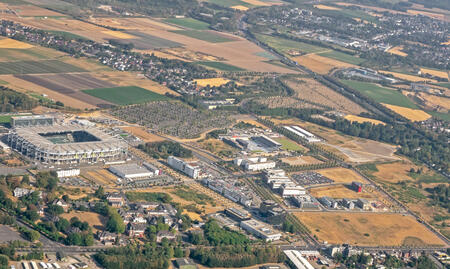